Fires have been around for, well… forever. Although fire season may come and go, fires, in general, are clearly not going anywhere. The main thing we learn each fire season, however, is how to better prepare for and prevent fires in the future.

There are, however, a few remarkable fires throughout history that have fundamentally changed societies for the better. Who would have thought fires could bring good? Well, we did of course!

Since history seems to repeat itself, we’re discussing the greatest (I mean, worst…) fires in history, plus what we’ve learned from them.

Let’s get into it.

The Great Library of Alexandria

This library, the Library of Alexandria, was, at one point, a fountain of knowledge of the world. Built in 283 B.C., the library quickly became a destination for scholars who would travel there to work and study its over half a million scrolls.

Legend has it, however, that Julius Caesar set the library on fire in 48 B.C. as an “accidental consequence of war” in an attempt to gain control of the city. Some, however, believe a branch of the library survived but was destroyed almost 400 years later in 391 A.D. by a bishop of Alexandra.

The wealth of knowledge the library contained was lost to the flames. Playwright Tom Stoppard, expressed, “the enemy… burned the great library of Alexandria without so much as a fine for all that is overdue!” 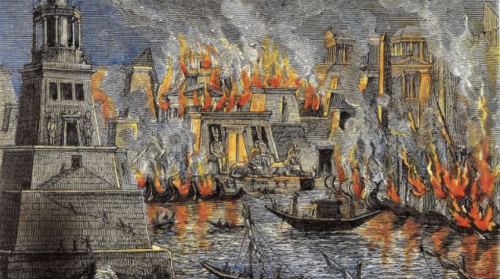 Photo courtesy of The Daily Beast

The Great Fire of London

Chances are you’ve heard of this one.

In 1666, London struggled to survive the Black Plague amidst the Great Fire of London. This fire raged for five days between September 2nd and September 6th. In its wake, the fire demolished 13,000 homes, leaving 100,000 people homeless.

An infamous building not spared by the flames was St. Paul’s Cathedral.

So, what good came out of this fire? Although it took over 30 years to rebuild London, city planners rebuilt it with stone buildings and wider streets. They learned from their mistakes; to not rebuild London with the wooden structures and narrow streets like before.

The Great Fire of London also paved the way for what we consider modern property insurance and fire brigades.

The Great Fire of New York

The fire erupted in the middle of the city’s cholera epidemic. (We’re sensing a pattern here…) The fire was caused when a warehouse caught fire and strong winds pushed the flames throughout the city.

New York’s water supply was not up to battle the flames, which made it difficult for the city to put out the fire. The fire’s rapid growth and popular trading location on the Erie Canal meant they didn’t have enough sanitation and clean water to combat the fire.

So, what did we learn from this great fire? Primarily that we need sufficient water supplies to put out fires in case of an emergency.

In 1837, New York City built the Croton Aqueduct which brought over 12 million gallons of water to firemen who needed the water to put out fires. It also brought clean water to the people of New York, which was desperately needed during the cholera outbreak.

Dan Levy, author of the Manhattan Phoenix, shows how the Great Fire of 1835 helped reshape the city. He explains, “[The fire] revolutionized American water systems and became a training ground for a whole generation of American engineers, who would go on to create the nation’s aqueducts, railroads, and canals.”

A few short years after the Great Fire of New York, the city of Chicago fell to flames in 1871.

For three days between October 8th and October 10th, a third of Chicago was destroyed. This fire left 90,000 homeless and 300 dead. It’s suspected that the fire started in a barn on the southwest side of the city; however, no one is absolutely sure how it started. Regardless, it caused citywide destruction.

“The Great Rebuilding” of Chicago came after the fire.

This period helped the city become a new hub for business, as it sits in an optimal location for the trade of the nation’s natural resources to America and beyond.

The rebuild was highly prioritized and heavily invested in. In fact, over $10 million was donated to rebuild the city. According to Carl S. Smith, author of Chicago’s Great Fire, said it best: “The fire became critical to the image of Chicago as the embodiment of the irresistible force of modernity in America.” 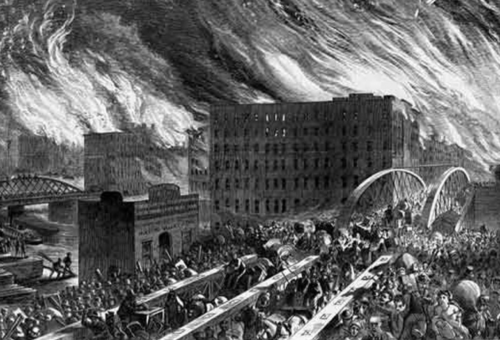 In 1911, the Triangle Shirtwaist Factory Fire erupted in the Asch Building in New York City’s Greenwich Village. The fire trapped the people, most of whom were young women and immigrants, inside of the building. Many tragically leapt out of the building to their deaths.

What did the city learn from thisfire?

The public rallied together to press the government to take action to protect workers. This led to new workplace safety laws not previously implemented.

One woman, Frances Perkins, witnessed the tragedy and dedicated her life to defending workers’ rights. She then set out to create the Factory Investigating Commission and helped transform the work landscape in America as Roosevelt’s Secretary of Labor. 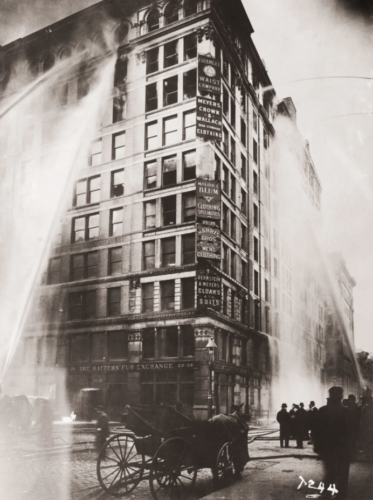 In the 17th and 18th centuries, rivers were used as dumping grounds for gasoline and sewage. John D. Rockefeller built an oil refinery along the Cuyahoga River. Between 1868 and 1952, the Cuyahoga River burned nine times from oil and sewage severely polluting the water.

While Cleveland’s Cuyahoga River fire in 1969 was not as massively destructive as fires preceding it, the fire broke out right as national media began focusing on growing environmental issues.

The public began seeing a need to protect the environment. The timing of the fire paired with national recognition to protect nature became the catalyst for the creation of the Environmental Protection Agency, the Clean Water Act, and the Endangered Species Act. Wow! 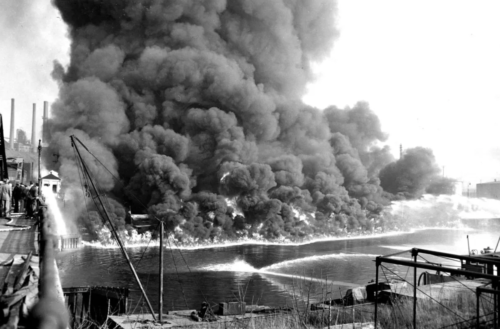 Photo Courtesy of The Allegheny Front.

Yes, fires are disruptive and destructive.

Through their destruction, however, leaves room for cities to learn and to grow. These tragic fires of history paved the way for safer city planning, workplace safety, and national environmental reform.

The good news for you is that through years of experience, VFS Fire & Safety understands fire safety like no other. Learn more about how to suppress fires, not feelings in our article here.

How to Prevent Your Fire Protection System From Freezing

AHJ – the Paul Blart of Fire Protection Scroll to top